Skip to content
Demonstrators climb on a destroyed Baltimore Police car Monday furing violent protests following the funeral of Freddie Gray. The 25-year-old was arrested for possessing a switchblade April 12 outside a west Baltimore housing project, and died a week later in the hospital from a severe spinal cord injury he received while in police custody, according to his attorney. 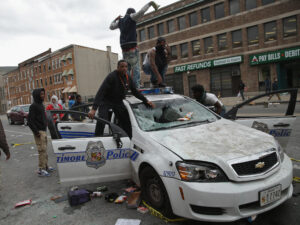